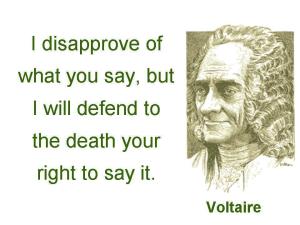 The Washington Post showed Charlie Hebdo’s cover of this week’s issue in their article discussing it.  The New Yorker didn’t. Nor did The New York Times.  (Although their online edition contains a link to Charlie Hebdo).  I read an article online about the new edition with the caricature of Mohammed crying, holding a sign that says “Je suis Charlie” and the words above him Tout Est Pardonne (All is forgiven).  I hesitated before posting the article on my facebook page.

Yesterday I saw a friend’s post that said “Why is no one posting the cover of this week’s Charlie Hebdo on Facebook? I believe The Times ran a front-page article, but neglected to print the image. We all get kind of quiet when it’s truly risky, myself included.” People are critical of The New York Times not posting it because print readers do not have the access to the links provided to online readers.

This is all very timely in connection to the hack of Sony Pictures in response to the release of The Interview.  There are literal violent attacks on free speech taking place in the world.

As a theatre artist and a writer, this is heavy shit.  And it should give anyone pause who writes, who tries to express themselves through art, pause.  These attacks are on artists.  The people who made The Interview are writers, directors, and actors.  The people who work at Charlie Hebdo are artists and writers.  If you are an artist or writer, you should be upset by this.  Very upset.  And you should be speaking out about what this means.

I have written things that people don’t like.  They tell me.  I tell them I appreciate their opinion.  And then we move on because it is my opinion.  I have also had people comment on my blog in hateful and misogynistic ways.  I delete them.  The difference to me is that we can disagree with each other without being hateful.  We can express our opinion without hate.  Once hate or violence enters the discussion or the debate, we’re not going to come to any understanding or respect for each other.

We are not a nation that tends to come together for much.  We tend to unravel, mistrust, and debate in nasty ways.  It saddens me.  The recent divide on the killing of black men is a perfect example.  I have seen more hate on facebook by defensive white people than I have ever seen.

The gray that is our world is unacceptable to so many people who want to live in the black and white.  Audre Lorde, a feminist writer and activist whose writing inspired so much of who I am and what I believe said “your silence will not protect you.”  She was right.  If we cannot speak and act and create, why live? 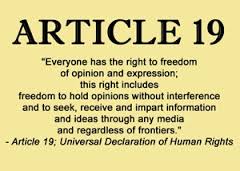