The Problem with Intersectionality

I should be going to bed.  I have spent the last 2 days  at the Department of Justice’s Violence Against Women Training because I was lucky enough to win a grant for my university to fund victim/survivor services, education and training.  Woo Hoo!

In the midst of heading to wintery Virginia (yes, it is freezing here!), Patricia Arquette, winning a best supporting actress award, has been attacked by liberals, feminists, and others, for her comments off stage.  On stage, she spoke passionately about how wage equality is an overdue piece of the inequality puzzle, even in richy-rich Hollywood where women are paid much less than men, and even more so, as always for women of color.  Then, as everyone has seen in the mass media, she goes on to say that it is “time for us” and that “people think we have equal rights; we don’t. Until we pass a constitutional amendment, we won’t have anything changed. It’s time for all women in America and all the men who love women and all the gay people and people of color that we’ve all fought for to fight for us now.”

Before I comment on her quote and its backlash, it should be stated that I define myself as bisexual, white, female, middle class and feminist.  I am a survivor of sexual violence.    I serve on the Board of Directors of the YWCA of Southeastern Massachusetts whose mission is to “eliminate racism and empower women.”  Ending racism is part of my life’s work.  And in everything I do in my job, I am constantly striving, more so than ever, to call out and end racism and transphobia.  (Doing this at a university is hard and somewhat impossible work, especially when the powers that be think that people of color should be the ones explaining what the problem is and then fixing it themselves). I  live in the messiness that is intersectionality.

I didn’t watch the Oscars.  For one, I am on the fence about boycotting that elitist white patriarchal shit.  Two, I didn’t see any of those movies because I don’t have time.  (If I am going to watch acting,  I am going to see it live and support my local theater’s).  Three, I threw my husband a surprise 50th birthday party ,the night before, and we were just plain old tired.  I mean, God! He’s 50! We’re too old to stay up that late.

However, when I read her off stage quote, I honestly read that she was asking men (gay men and men of color) to help women out.  Not just white women, but all women.  And yes, using the term gay “people” and “people” of color was a miss-speak.  That’s all it was, I believe.  And maybe I believe this because I have white privilege.  Can we just breathe for a minute and not tear into a woman the minute she tries to have a voice?

Forbes crunched the 2013 numbers and showed that among the kind of lavishly compensated thespians who fill seats at the Oscars, men make way, way, way, way more than women. The men on Forbes’ list of top-paid actors for that year made 2½ times as much money as the top-paid actresses. That means that Hollywood’s best-compensated actresses made just 40 cents for every dollar that the best-compensated men made. No wonder Meryl Streep and J-Lo are pissed(http://www.slate.com/blogs/xx_factor/2015/02/23/gender_wage_gap_in_hollywood_it_s_very_very_wide.html)

I’m sad that a woman spoke up about inequity and because she did not address the intersectionality of the inequity in her comments, using the terms “gay people” and “people of color,” feminists and liberals are branding her with a scarlet F for her flub.  But I’m more disappointed  that liberals are attacking other liberals for their lack of intersectionality in everything they say or do is becoming popular right now.  Coalition building is all we have to fight the never ending attacks by the right against issues like trans* friendly policies and law, reproductive rights, and violence against women  (“in a world where every three years the death toll of women murdered by their partners or former partners tops 9/11 casualties,” Solnit Men Explain Things to Me, 23).

A feminist colleague of mine wrote”

I have been so angry about these attacks on her that I had a hard time sleeping last night. I actually had someone say that white women should not speak because the inequality we face isn’t as bad as other segments of the population and we don’t know real discrimination. In other words, smile and shut up because what you have to say doesn’t matter. Because that is healthy. If only we fought for equality with the same fervor we fight each other. Sigh.

This is the problem with intersectionality.  We can only speak to OUR personal truths.  We can be allies to other people and fight passionately for their rights.  This all connects back to the boycott of The Vagina Monologues by Mt. Holyoke because they are now a trans* friendly school  Eve was not writing a play about EVERY WOMAN’s experience.  She wrote a play based on a few interviews she had with a few women, about their vagina’s, over 16 years ago. And Arquette, by the way, has a trans* sister, so I’m quite certain she doesn’t believe that LGBT rights are all set.

Everyone needs to just fucking relax.  Fighting amongst ourselves about whether we have included EVERYONE in what we just said will not get us anywhere. Not to mention, the right just eats this shit up.  I am reminded of a quote I had for years over my desk.  “Don’t scratch a sister because the system will do it for you.”  Patricia Arquette certainly got scratched.

Posted in Uncategorized. Bookmark the permalink.

The older I get the less engaged I am with, or in pop culture.  I’m not sure if this is just a “thing” or if I am too busy or what.  I feel like it is just because there is only so much room in my brain and so many hours in the day to keep up.

I’m currently watching Season 7 of Dexter. I want to start Orange is the New Black.  I want to see Transparent, even though one of the producers said some transphobic crap about Bruce Jenner.  I could make a list of all the television series I want to binge watch, but I’m not a binge watchers.  (I’m not really good at sitting still for long periods of time.)  I want to find out how to watch the next season of VEEP without subscribing to HBO.  I had to watch back to back episodes of Scandal and How to Get Away with Murder as I missed the first two episodes of the mid-season. I want to get rid of cable, but I was worried about missing my Daily Show.  Not anymore.  We watched his Tuesday night show on demand last night and I wept.  Yeah.  I admit it.  I love that man.

But I work with college students.  Every day.  They are so up on everything pop culture.  I feel mixed about how much I should know about their world and how little time I have to know it.  I want to do more yoga.

Music is another piece of that puzzle.  I flipped through some pictures of the artists at the Grammy’s the other night and there were many I did not know. Whenever I am in the car with a younger person, like Kendra, my 26-year-old staffer, I ask who the artist is singing the songs I know.

I have a list of books I want to read.  Three people have given me The Secret History of Wonder Woman.  I just finished two books on my trip to Denver, Amy Poehler’s Yes Please and a book called The Rosie Project by Graeme C. Simsion, who is a man.  That probably isn’t surprising to most folks, but I tend to read books by women in an attempt to make up for all the male writers I was required to read in high school and college.  Some have said that is a sexist position to take, but I feel as if I am just providing balance where my education did not.  And, I’m 46 and can read whatever I want.

Then there’s the movies.  I have an actor/director friend who I think might see every movie that comes out.  Seriously.  He overwhelms me with how many movies he sees.  He also doesn’t own a house, yet.  This movie machine may slow down once he has to fix an ice dam on his roof.  The last movie we rented was The Interview.  That was probably two to three weeks ago.  I have not seen any of the movies nominated for Oscars.

I love to go to theatre.  But carving out the time to do that on top of all the other media demands in my life is a challenge.  I have seen three live shows in 2015.  Two were plays and one was a musical performance.  Is that enough?  Is it too little?  Is it average?  I can only judge by my peers attendance, which varies, although I am by far, not the best theatre goer in the group.  Like my movie going friend, I have theatre friends who go see everything, which is a challenge in Rhode Island, where there is even a bit of over saturation in the theatre world.

I think it has become increasingly difficult in this media saturated culture to keep up with news, movies, television, music and social media.  And to do all this while exercising at least 30 minutes a day, drinking 8 glasses of water, getting 7-8 hours of sleep, and eating healthy is impossible.  Look at this excellent graphic of the media saturation during the Super Bowl. 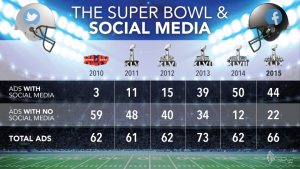 Saturate also means to destroy (a target) completely with bombs and missiles.  Maybe that is how I am feeling.

So what’s a gal to do?  The answer is not clear to me at all.  For now, I will go to work, come home, cook dinner and watch an episode of the last season of Parks & Recreation, because it’s Tuesday.