The Kilroys Challenge Theatres to Produce 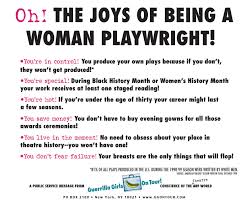 Last week The New York Times did a piece on “Creating a Supply Chain of Women Playwrights.” This subversive group, The Kilroys, asked 127 theatres to help create a list of plays written by women that had one or no productions but “were among the best they had seen or read this year.”

Unfortunately just a list ain’t gonna fix what I would call a root cause.  Um.  Sexism.

And there’s another problem with the list.  A good friend of mine runs a small theatre in Rhode Island.  He is dedicated to having a diverse lineup every season.  However, the minute he calls Samuel French or Dramatists Play Service to ask about producing a new play by a woman, this is what he gets;

“We are holding this play for an equity theatre.”  Or, “we aren’t letting smaller theatres produce this one.”

This conversation constantly happens.  In fact, he recently got into a screaming match with a publisher at Samuel French.  He said “don’t you think the playwright would be thrilled to have her work produced?”

So here’s the dilemma.  Women writing and publishing plays.  Publishers who get to decide where these plays are produced, with little to no input from the actual playwright.  What’s a good artistic director to do?

Then there’s just the whole trying to find a play to read piece.  So, this same artistic director sends me a list of plays to read.  I go to the library website at work.  Searching for a single play is like looking for a needle in a haystack, excuse the old metaphor.  Most plays are published in collections.  One must find the collection it was published in, say the 2010 Humana Festival of New Plays. You would actually have to know that the specific play you were looking for was first produced at the Humana Festival.

Plays are not like books that get published and are easy to find.  People might actually read more plays if they were more accessible to the non theatre producing reader or audience member.

In the 90s, I wrote my first op-ed about the Jonesboro shootings, which killed girls and a teacher.  The killer was a woman-hater who was targeting women. During the week  following the Santa Barbara killings, articles came out about the hashtags #notallmen and the response #yesallwomen developed by a woman named Kaye, who was subsequently harassed and had to take down her Twitter.  Anita Sarkeesian of the vlog Feminist Frequency was similarly harassed when doing research on men’s violence in video gaming.  She was threatened, hacked and stalked. The examples under #yesallwomen on Twitter are sad, mind-blowing and anger inducing.  That our brothers and fathers and grandfathers and male partners do not “get it” is also sad, mind-blowing and anger inducing.

A few tweets, videos and articles that succinctly get to the point are linked below.

My husband didn't 'get it' until he spent half an hour on the feed. Then he looked ashen. "I had no idea". #YesAllWomen

And this video by a smart and sassy sexual educator succinctly labels the problem:

These four articles are also good takes on this epidemic.

But here we are, less than a month later, and this is another news story that has passed us by.  I began writing this three weeks ago, but stopped with a mere draft.  Looking back, I think I needed a break from writing about the killing of women by men.  Then I had to spend a week in Atlanta learning about sexual violence prevention and education.  That was exhausting, mostly because of the redundancy but also because the subject wears on you.

Preventing violence and supporting victims is part of my job and has been for almost twenty years.  But it’s tiring.  Change is slow. Even slower is institutional change.  For years, it’s been the job of the “women’s center” to prevent violence and advocate for victims.  Why is that?  Shouldn’t it be the institution’s job?  Shouldn’t this be a problem that the community would want to fix?

If we take global warming, as an example.  I don’t think anyone (who agrees it is a problem) would say they didn’t have some responsibility in trying to end it.  I have to examine my own environmental footprint and do what I can to reduce it.  I recycle, I compost, my partner re-purposes practically everything I want to throw out.  We are on the hunt to be more energy-efficient.  We switched from oil to gas this year.  We are looking into solar . . .

I’m sure many people do these things and believe it is their responsibility.

But rape?  I don’t know.  The World Health Organization cites these statistics on sexual violence:

Recent global prevalence figures indicate that 35% of women worldwide have experienced either intimate partner violence or non-partner sexual violence in their lifetime.
On average, 30% of women who have been in a relationship report that they have experienced some form of physical or sexual violence by their partner.
Globally, as many as 38% of murders of women are committed by an intimate partner.
Situations of conflict, post conflict and displacement may exacerbate existing violence and present new forms of violence against women.

This semester we held a comprehensive Sexual Assault Awareness Month, as we normally do.  We had a record turnout out for an event called Project Unbreakable.  This project allows survivors to write out messages to their rapists as a form of healing.  During the Q&A, I asked if the speakers and founders if they felt there had been any “less” violence since starting their work.  They were both very hopeful about it.  Later, one of the women wrote about how I was disheartened and burnt out, because I hadn’t seen any change in 20 years.  I was challenging them to look at how much worse the media representation of women is and that, for me, is a sign that things are getting worse, not better.

It was one of those moments where either I realize I am burnt out or old.  Maybe my lifetime of doing this work can’t equate to a 25 year or 30-year-old in the thick of it.  She doesn’t remember at time when television didn’t even depict women, much less as a sexualized object.

Posted in Uncategorized. Bookmark the permalink. Leave a comment
Karen and the Car-T Cells
my feminist praxis