Twitter Facebook RSS Feed
← Words are Hard to Come By
Standard Times Op-Ed: End Use of Racial Slurs for Mascots →

I love award shows.  It’s the little girl in me who watched The Oscars as a kid and dreamed of being up on that stage.  And while that dream has certainly faded as I’ve moved into my mid 40s (gasp!) , I still enjoy seeing the actors I love get recognized.

However, with the tinted glasses of feminism, award shows generally piss me off.  The lack of diversity in this year’s Emmy awards is frightening. And even more so, in some senses, than Hollywood.  Movies cost money, much of television doesn’t.  (although more and more shows being recognized are from HBO, Showtime, and Netflix, channels that do cost money).  What is most accessible to young people is a white coated representation of life, as shown in the nominees for this year’s Emmys.

For Directing a Drama, there are two men of color, Carl Franklin for House of Cards and Cary Joji Fukunaga, who won for True Detective. 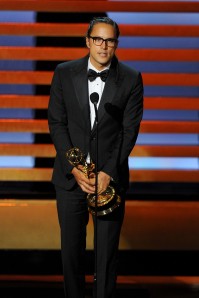 The most diverse lineup of nominees was in Best Direction for a Comedy Series, which had one African-American man and two women in the lineup with Gail Mancuso winning for Modern Family.

Spend some time scrolling through these lists of nominees and you’ll get a white view of television’s lack of diversity.  What is someone who cares about representation to do?

I don’t watch a lot of television these day, but I need to become much more investigative in who is directing and who is represented.  I love VEEP, strong female role, but that show is also very white.  I know that Orange is the New Black is the show to watch for diversity, but I can only get sucked into one series at a time.  I watch Scandal because I believe in Shonda Rhimes and Kerry Washington being the first African-American women lead in decades.  Modern Family has a touch of diversity, as does The Walking Dead, my husband’s favorite series right now.  I love Key and Peele.  But my love of fake news shows, The Daily Show and The Colbert Report are led by two very white men.  And honestly, there are only so many hours in the day to even watch television if you roll in at 6pm, put dinner together and get to bed by 10pm.

The only way to keep on task is to keep talking about it and keep sharing information on good examples and bad examples.  And maybe, just maybe, turn off those shows that reflect a society that really doesn’t exist anymore.