Rape is having a field day in the media.  The first of these examples is the horrifying video against Obamacare, sponsored by Generation Opportunity http://generationopportunity.org/#axzz2idFIEC8O.  This organization, made up of almost all white young people, is anti-Obama and anti-healthcare, as depicted in this video, which was paid by the rich Koch brothers.

Apparently, using the rape of a young woman by an Uncle Sam character is an acceptable way to promote one’s agenda.

I am a fan of American Horror Story, which features strong female acting and characters.  This new season, Coven, featuring Angela Basset, Kathy Bates and Jessica Lange is funny and creepy.  However, during episode one’s gang rape, Twitter (ah, yes, the infamous twitter) was a flurry of activity with Emma Roberts haters tweeting that she deserved to be gang raped.  http://www.bustle.com/articles/6639-american-horror-story-coven-rape-scene-cheered-on-by-emma-roberts-haters

Then in the wake of the Maryville, MO rape of a 14 year old girl, Emily Yoffe, who writes the Dear Prudence for Slate.com (should we be surprised?), titles an article “College Women:  Stop Getting Drunk.”  http://www.slate.com/articles/double_x/doublex/2013/10/sexual_assault_and_drinking_teach_women_the_connection.html.

As someone responsible for teaching college women tips to keep them safe when they get to college, I am offended by Yoffe’s article.  Did she talk to any Women’s Center staff, Rape Crisis staff, or Orientation Directors at universities?  I doubt it.  She would know that rape prevention is about teaching women and men how to protect themselves through a multi-faceted approach, that includes knowing your limits with alcohol.  But she misses the larger point about rape culture, as does most of mainstream media.

I am also offended that Yoffe decides to write an article about college women getting raped because they drink as a response to a 14 year old rape victim whose case was dropped by their horrible police because the family of the alleged rapist is rich. The real cause of rape is shown below.  If only the white male dominated media was required to take Introduction to Women’s Studies, the perpetuation of rape culture might be minimized. 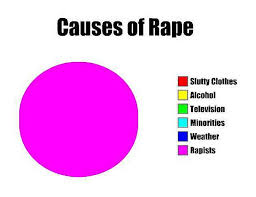